Meet the Department: Research and Development 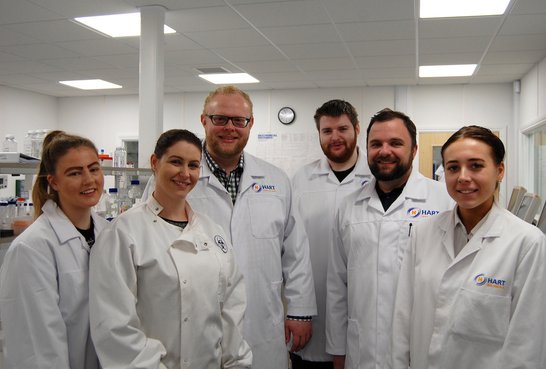 Hart Biologicals is made of many departments that work together to ensure the smooth working of the company.

Research and Development (R&D) is made up of five members of staff including the Head of R&D, a research supervisor, two R&D scientists and one intern.

The R&D department’s main responsibilities lie in the development of new tests and improving on current and already established tests in the coagulation platelet aggregation field.

Alexander, who has been with the company since 2013, said: “Lately there has been an aspect of contract research to develop or modify specialty reagents for systems and instrument manufacturers.

“In addition to the contract research, we work on Hart Biologicals' own label product catalogue where we aim to improve the products based on changes to the market.

“We’re currently working on making a specialist PT even more cost-effective which will allow us to enter into more developing markets which are more conscious about price including Egypt, Thailand and countries in Africa.”

R&D is currently working on a number of projects and has seen many innovations over the years. Most recently the Fiix test.

Stuttgart-born Alexander, who lives and works in Hartlepool, said: “The Fiix Test, is an innovative system for performing PT/INR testing that simplifies results for medical professionals.

“The test was developed by Icelandic company, Fiix Diagnostics, which has appointed Hart Biologicals as its commercial partner.

“It has been described by some of the doctors we met at the 2018 American Society of Haemostasis conference in San Diego,as one of the first real innovations in the field of INR and PT over the last 60 years.”

The R&D department has also been working on a modified collagen formulation.

Alexander said: “Collagen is one of the tests used in platelet aggregation and there are dozens of types including those in your skin and fibres between cells.”

The research department is currently working on one specific type of collagen.

Research and Development Supervisor Christian Genz, who is originally from Berlin and studied biochemistry at the Eberhard Karls University of Tübingen,said: “One of our customers has a very particular interest in how they need the collagen to behave and we are aiming to meet those needs as closely as possible.

“It is helping to improve our own collagen to behave like the gold standard in the industry right now. “

Hart Biologicals offers contract development for its customers and can tailor and customise already developed products to meet their standards.

Alex continued: “We’ve already made many different collagen reagents over the course of Hart Biological’s inception including a bovine version, an equine version and a version that is both liquid stable and a lyophilized version.

“It’s very typical for us to make several iterations of that product and now we are working alongside a big B2B customer who wants it to behave ever so slightly differently causing us to optimise for their needs.”

When asked which values drive the R&D department, Alex said: “Innovation and inquisitiveness. You need to be able to develop your own experiments, interpret data, make conclusions from that data and take it to the next step.

“We see that in everybody that works within the department. It’s not just myself and Christian who make every decision, we like people to know what they are doing themselves.”

Christian concluded: “It’s important that we’re critical of our own results by ensuring that the interpretation of those results is the most valid one and critically thinking if the experiments show what we interpreted or is there another explanation.

“No day is like any other for us. We often don’t know in advance where our experiments will lead us. We don’t follow strict protocols but instead develop our own protocols as we go along.

“We have to be much more creative than other departments.”