Enter your email address & we'll get you back on track 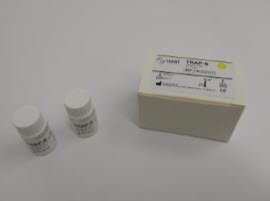 TRAP-6 is a synthetic hexapeptide that activates the thrombin receptor independent of receptor cleavage. It corresponds to amino acids 42 to 47 of the thrombin receptor and mimics the effects of thrombin. Thrombin is a very potent platelet activator. Its action is not blocked by anti-platelet drugs such as Aspirin or Clopidogrel. TRAP-6  can be used as an alternative to Thrombin as a platelet activator as it is easily standardized and more stable than thrombin. TRAP-6 can be used to detect the action of GpIIb/IIIa antagonists such as Reopro, Aggrastat or Integrillin.

Note: To download a copy of this Product's Instructions For Use in English, create an account by clicking 'Register' at the top right corner of this screen.  Other European languages, including French, German, Spanish and Italian may be available upon request.